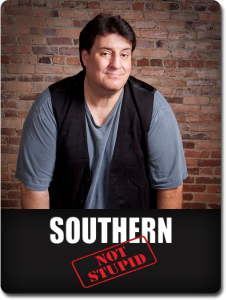 Most professions have a clear cut path on how one becomes whatever they become. Whether you spend years in college or fill out an application at McDonald’s, there is a defined process. Comedy is NOT like that.

Every comedian had a different journey, here’s mine. I always loved comedy growing up. I use to sneak down stairs and hide behind the couch to watch the Tonight Show if George Carlin or Rodney Dangerfield was on. But I never in a million years dreamed I would ever do stand-up. I wasn’t even the Class Clown! (That was David McGrew by the way. Funniest guy I ever knew growing up!) I first got behind a microphone in my mid 20’s when I became a DJ at Studebaker’s in Atlanta. The club owner always told me to be funny on the mic but every time I said anything remotely funny, he would freak out and say if I ever said anything like that again I’d be fired. Like anyone ever listens to what a nightclub DJ says?!?

I did not want to become a 30 year old club DJ so I went back to school to become a paralegal and took a night job at the Improv Comedy Club. That’s where I learned about the Jeff Justice Comedy Workshoppe. This sounded like a lot of fun, sort of like a comedy fantasy camp for only $195.00. (Baseball fantasy camps were $3,500.00, so this was a deal!)

I had so much fun I started doing open mic’s every chance I got. It was still just for fun but then one day someone offered me $100 to do a show. I was 32 years old and normally that wasn’t a lot of money to me. But a hundred bucks to do stand-up? That seemed like all the money in the world!

So that was it, I was hooked. Comedy is what I HAD to do. Within a few years I was able to take the leap of faith and quit my day job. That was scary as hell to do but I never looked back!

Since then it has been an amazing ride! I’ve performed in almost every state (46), several cruise ships, and a number of countries. I’ve seen parts of the world I never could have gone to and met some amazing people. I’ve been able to work with some giants in the comedy world. To hang out with, go to lunch, or even give a ride to some of these people has been something I could never put a price tag on.

You know that old saying about finding something you love to do, then finding a way to get paid for it means you never have to go to work again? It could not be truer.  I get to wake up every day and continue to chase my dream!!

Off the Beaten Path:

close
Start typing to see products you are looking for.
Scroll To Top